Running their second meet in three days, the boys cross country team came out prepared to fight for a team championship. Improving their times from the previous weeks, the team came up just short of winning but finished as the Caston Invitational runner up.
Will Neubauer was the top finisher again for the Eagles, finishing in 5th place in 17:54. Not far behind was Sami Mirza who finished in 10th in 18:41. Also running in the varsity race was Will McCarthy (18th), Alexander Macharashwili (29th) Ngor Agwick (32nd), Amor Beganovic (35th), and Kierran OBrien (41st). 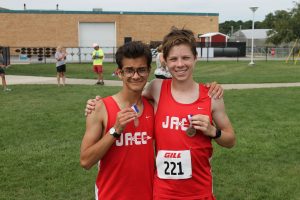 The boys junior varsity was just shy of the perfect score in the race but did win the team championship with a score of 17. Junior Brendan Quinn was also the individual champion of the race as well, Quinn won in 20:20. Finishing second was Jackson Rancourt, third George Ruscio Atkinson, 5th Colby Szymczak, 6th Keion Taylor and 15th Josh Evans. 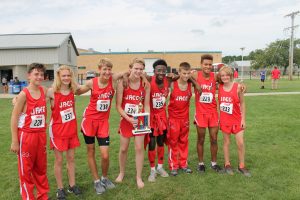 A full gallery of pictures can be found at Caston Pictures