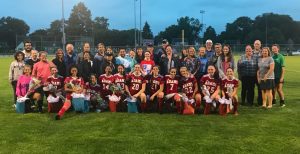 The Eagles struck early and often against the Lions. Grace Wilson started things off for the Eagles scoring in the 8th minute. In the 28th minute Solena Cruz scored again for the Eagles. Both Wilson and Cruz were unassisted. In the 31st minute Veronica Karban was able to connect with Anna Borkowski who scored the goal. Just before the half Emile Vereb added one more for the Eagles.

In the second half Borkowski scored again in the 64th minute, this time with the assist from Solena Cruz. Emile Vereb was able to score again as well in the 70th minute with the assist from Veronica Karban. Karban had an impressive next 10 minutes as she added the final two goals for the Eagles scoring in the 73rd and 77th minutes. She was assisted by Cruz in the first and Ali Mihut in the second.

Adams had a total of 25 shots on the goal Thursday night and goalkeepers Jaden Valentine and Makiah McCain had 6 saves.

The team improves to a record of 5-3 for the year.