The Lady Eagles soccer team hosted Penn on Tuesday night in a matchup between NIC opponents. Throughout the entire game both Adams and Penn were very evenly matched both offensively and defensively. With each move that their opponent made, the Eagles were able to respond. Scoreless in the first, the Eagles took the momentum that they had into the second half of the game, continuing to put the pressure on Penn. The Eagles had 4 shots on goal, compared to the 12 taken by Penn. With key plays from goalkeeper Makiah McCain, Adams was able to hold off the Penn attack. 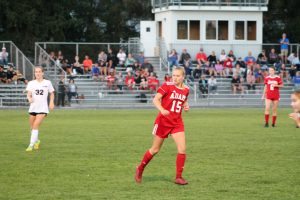 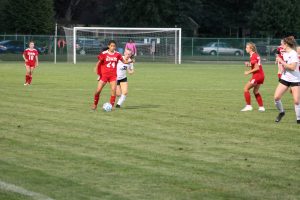 It was not until the very end of the game where Penn was able to capitalize and score twice on the Eagles in the last few minutes of play. 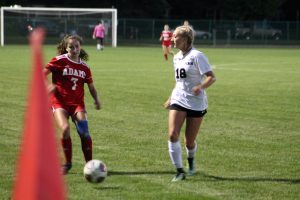 The Junior Varsity also lost to Penn with a score of 0-2.

The loss is the first for the Eagle in Northern Indiana Conference play. The Eagles are 2-1 in the NIC and 6-4 overall. Adams will play again on Thursday evening as they travel to Walkerton to face the John Glenn Falcons.