Wednesday evening was a perfect fall night for Northern Indiana Conference girls soccer action at Tallmen Breyer Field in South Bend as the Eagles hosted SB St. Joseph. In a hard fought match that went into overtime, the Eagles came up just short, falling to the Indians 2-1.

Throughout the first half of play, the offense put continued pressure on St Joe and every time that the Indians moved down field the Eagle defense was able to repel any attack. Coming off the bench late in the first, Kierra Watford made an immediate impact, scoring for the Eagles in the 31st minute of play, assisted by Anna Borkowski. The score ignited the Eagle play and they took the lead into halftime. 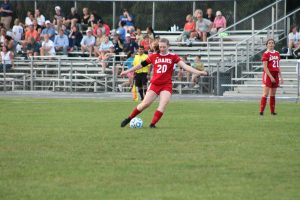 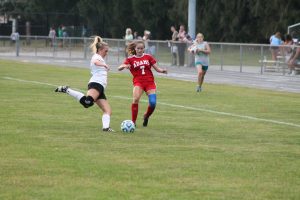 In the second half the Lady Indians attempted multiple times to score but the impressive action by Adams goalkeeper Makiah McCain stopped shot after shot. McCain finished with 10 saves on the night, keeping the Eagles on top until the 73rd minute when St Joe was able to finally score. 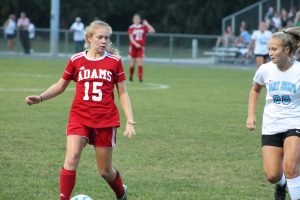 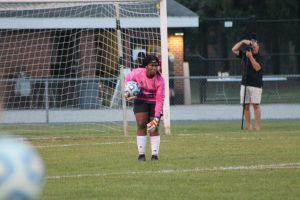 In overtime the Lady Indians scored again and while the Eagles had several shots on goal they were unable to score again.

Even with the loss Adams still has a winning record of 8-5 for the year.

Adams will play again in a make up game from earlier in the year next Thursday at Marian HS.