The first winds of fall might be cold for most but not for the Adams Boys Cross County team. The weather was perfect for the IHSAA Elkhart Regional Meet at Oxbow Park. Under the rules of advancement, all seven of the runner at the South Bend Sectional a week before advanced not as a team but all as individuals to the Regional. Due to this the runners were not able to score and advance as a team.

One of those runners, Sophomore Williams Neubauer will be continuing his season next week at the IHSAA New Haven Semi State Meet. The top 5 teams and top 10 individuals from non advancing teams move on to the semi states. Neubauer ran a personal best at the meet of 17:03, finishing in 16th place. 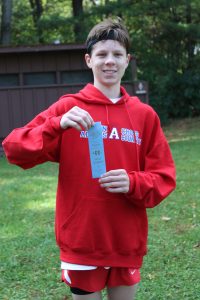 Neubauer was not the only one with an impressive performance on Saturday. The rest of the team was able to run as a tight pack with only 47 seconds between the second and seventh runner. Will McCarthy finished in 59th place in 18:01. Finishing in a tight pack was Kieran OBrien ran 18:11 finishing in 73rd place, right behind him was Amar Beganovic in 74th place in 18:32 and then Alexander Macharashiwili in 75th running 18:36. Brendan Quinn finished in 18:41 in 77th place and Ngor Agwick finished in 83rd running 18:48.

Neuabuer will be competing in the New Haven Semi State next Saturday. 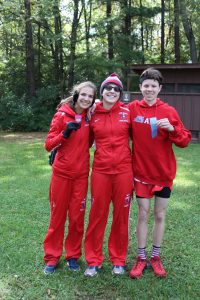 Complete results can be found at Boys Regional Results

A full gallery of pictures can be found at Regional Pictures