It was the start of a new year for the John Adams girls basketball program on Saturday with the Lady Eagles opening up against the Michigan City Wolves. It was also the head coaching debut of Adams Coach Dawn Huff. 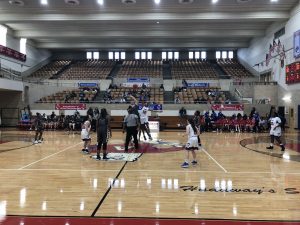 The Eagles experienced a few first game jitters at the beginning of the game, but as play progressed they were able to become more comfortable with the game. Both the Eagles and Wolves played a very physical and aggressive but the Eagles were unable to hold off the Wolves’ offense. Adams lost 28-86

The Eagles had many good shots but could not seem to get many of them to fall in. Adams’ leading scorer was Makiah McCain with 8 points. Loryn Higginbotham had 6, Maria Besario had 4, Samaya Sigur added 3, Whitney Marshall, Marissa Shelton, and Maya Allen each had 2 and Madylin Bauer finished with 1. 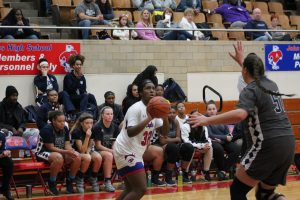 Adams begins the season 0-1 and will face their first Northern Indiana Conference opponent next Friday night when they travel to John Glenn.

In he JV game, Adams fell to the Wolves 28-35. The leading scorers for Adams were Maya Allan with 8 points and Brianna Woods with 6 points.