The Adams Girls basketball team got an early holiday gift on Thursday night, receiving a win over Northern Indiana Conference and in town opponent South Bend Clay. The Eagles defeated the Colonials 47 – 31.

The Lady Eagles were able to get off to a hot start, taking a 13- 3 lead over Clay after the first. The strong Adams defense was able to shut down the Colonials through much of the night. Throughout the second quarter the team rallied behind Sophomore Makiah McCain who ended up finishing the night with 13 points. After the half, Loryn Higginbotham took control of the came, eventually becoming the games leading scorer. Higginbotham scored 16 points. 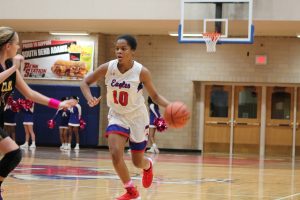 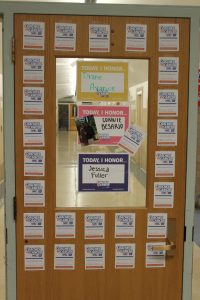 Thursday night’s game was not just a victory for the team on the court. The school also helped support a worthy cause for many families in the John Adams community. Through the Coaches vs Cancer campaign, the team and fans were able to raise $101.53 to help support the fight against cancer and fund cancer research.

Adams is now 3-10 for the season and 2-8 in the NIC. Adams has about week off for the holiday break, but will compete again on December 28 and take on LaPorte in the Marian Tournament.

In the junior varsity game Adams defeated Clay 49 – 20. The leading scorers for Adams were Marissa Shelton and Bre Woods who each had 9 points in the Adams win.