The wrestling team honored their seniors on Thursday night as they hosted South Bend Riley. Despite the festivities, the Eagles were unable to take down the Wildcats, falling 15 – 62.

Prior to the meet Seniors Dominique Clark and manager Marissa King for their hard work and dedication to the program. 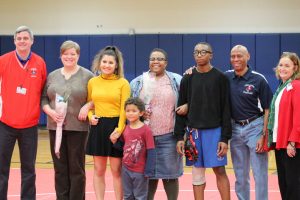 It took some time for the Eagles to get points on the board due to forfeits and the strong team from the Wildcats, but Adams finally found their grove as the night went on. Horrace Hill fought a tough match at 195 pounds, taking it through all three rounds, winning by a decision, getting the first points for Adams. Jonathan Thomas remains undefeated at 220 pounds, quickly taking down the competition with a fall within 25 seconds. Finally at heavyweight Joe Phillips has continued to improve as the season has progressed, winning by fall 45 seconds into the match.

Adams has a few days off as the holidays come but are beginning to prepare for the prestigious Al Smith Invitational next weekend.