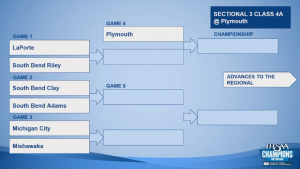 The winner of the Plymouth Sectional will play in the LaPorte Regional on Saturday June 1.

The Semi State is scheduled for Saturday June 8, with exact locations to be announced following the Regional.

The 4A State Championship will take place at Victory Field in Indianapolis on Monday and Tuesday June 17 and 18.

The IHSAA has the following restrictions:

More information can be found on the IHSAA at http://www.ihsaa.org/dnn/Sports/Boys/Baseball/StateTournament/tabid/3223/Default.aspx#38642476-sectionals