For the 22nd year in a row, the John Adams Girls Track and Field team has had an individual or relay compete at the IHSAA State Finals. This year that athlete was Alecia Parker who qualified in Shot Put. Parker reached the State Finals after being crowned the Sectional Champion and Regional Champion, and breaking the John Adams School record.

In her second trip to the State Meet, Alecia looked to use the momentum of the last two weeks and improve from her finish in the meet last year.

It was not Parker’s day however, as she failed to qualify for the finals, finishing in 26th place with her best throw being 35’5.75” 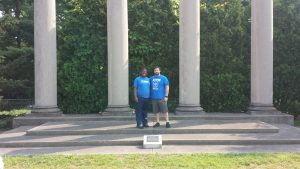 With her performance the JA Girls Track and Field Season comes to an end.

Congratulations on the season Lady Eagles!