Adams Junior Wide Receiver Sydney Jefferies has been named the Centier Bank Performer of the Week. Despite the loss for Adams at Penn, Jefferies put on quite a show against the Kingsmen. Jefferies began his night returned an interception 59 yards for a touchdown, running in to score on a 27 yard pass play, and returned a kickoff early in the second half back 93 yards. 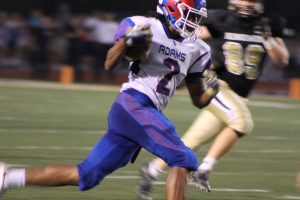 The Centier Bank Performer of the Week is open to any student athlete who participates in any IHSAA sanctioned sport and who school is located in the Centier Bank geographic area.

Congratulations Sydney on an impressive game and on the recognition!

IHSAA Regional
11:00 am
View All Events