It had been since 2006 since the Adams Boys Soccer team earned a Sectional title and the Eagles were hungry to take home the Sectional crown after such a long time on Saturday afternoon.

Adams played host to the Plymouth Rockies on Saturday in the Sectional Championship game at TCU School Field.

It was an extremely physical match from both teams on both sides of the ball, with both teams playing with heart and competing extremely well.

Adams was not going to wait to take the lead. Playing with a lot of positive energy from the semi final game earlier in the week, Adams came out aggressive, and it was Micah Fourman who struck first in the game. Fourman found the back of the net in the 4th minute of play.

The offense and defense for Adams played well, keeping the game tied 1-1 at the half.

The second half was an explosive period of 10 minutes for the Eagle as the team adjusted on the field, ready to put the game away. In the 44th minute, just after the start of the half Connor McKenna found the shot to take the Eagles up. Just four minutes later, McKenna would score again. A minute later, Michael Bellina scored as well, taking Adams up 4-1.

As the half progressed and the Rockies got aggressive to dig themselves out of the hole they were in, the Adams players played well and stayed calm, pushing back each attack down field.

When the final horn sounded, Adams was victorious 4-2, winning the Sectional Championship. 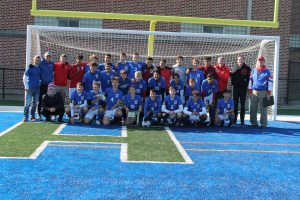 Adams will advance to next week’s Regional at Penn High School. The Eagles will take on Lake Central in the first game of the day. 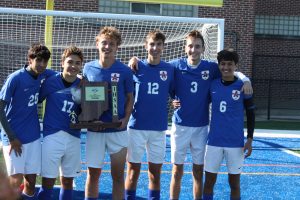 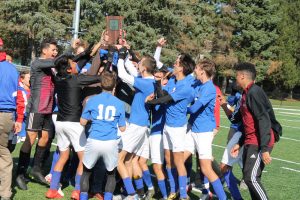