During the month of October for high school cross country, its race well or go home. That was the challenge that the Adams Boys Cross Country team faced on Saturday morning racing in the IHSAA Regional Meet at Oxbow Park.

It was the fourth time the team was racing on the course, so the Eagles knew the layout well and knew where to make the move in order to advance to next week’s Semi State Meet. The top five teams and next 10 individuals from non advancing teams move on to the Semi State.

The Eagles fell just short of moving on as a team, finishing in 7th place with a team score of 161. The team was just 6 points shy of advancing.

Individually however, two Adams runners will move on. William Neubauer put things together which resulted in a great race. Neubauer finished in 9th place overall with a time of 16:47. Sami Mirza also raced well, clocking a time of 17:00 which put him in 16th place. Both Neuabuer and Mirza were recognized as All Regional finishers and advance on to the Semi State Meet. 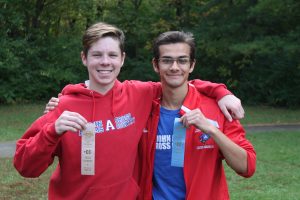 While not moving on as a team or as individuals, several other Adams runners performed well, setting season and personal bests. Ngor Agwick ran 17:47, Jackson Rancourt set a new personal best at 18:12, Alex Macharaswili ran 18:35, Brendan Quinn 18:39, and Sam Stanton a 19:01.

Neuabuer and Mirza will race in next week’s New Haven Semi State at Purdue Fort Wayne.