The regular season in cross country might have ended nearly a month ago, but three John Adams runners have been continuing to prepare for the Footlocker Midwest Regional Meet. This meet, run in Racine, Wisconsin featured some of the best talent from 13 states from the central part of the country. The top 10 finishers in this meet as well as the other three regionals would advance to the Footlocker National Meet later in December in San Diego. 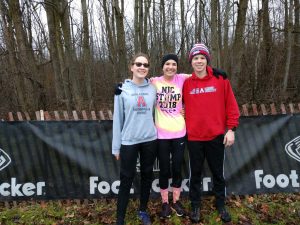 The three Eagle runners, who were the top runners for the team throughout the season that ran in the meet were Maddie Mischak, Ivie Skube, and Will Neubauer.

On an extremely muddy course in the cold, and very windy conditions the three runners capped of a stellar season from the firing of the starting cannon to the finish line lined with cheering fans!

Maddie and Ivie had the opportunity to run first in the Girls Championship Race. The course was wet and muddy and with the first mile almost entirely uphill, the fight was on to run with the best of the midwest. Both Maddie and Ivie ran well on a course that was truly challenging due to the conditions. Maddie ran down the final downhill stretch to finish in 186th place. Her finish was in 23:01. Coming down the final stretch not far behind was Ivie who has a finishing time of 23:39 which was good for 198th place. 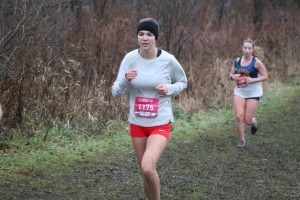 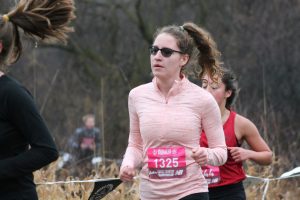 In the Boys Championship Race, Will faced even tougher conditions on the opening hill. Already trampled by two races and the many spectators, the pack of boys runners pushed their way through the mud that covered vast stretches of the course. Will worked his way through the large pack down the final fast stretch to finish the race in 18:05 which earned him 199th place overall. 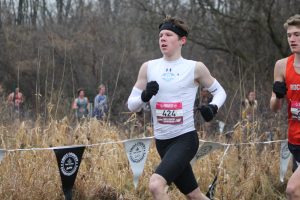 The race ends the cross country season for the three athletes and they turn their attention towards the upcoming months leading towards Track and Field season.

Congratulations Will, Maddie, and Ivie!