John Adams Senior Student Athlete Arturo Ortiz has signed his letter of intent to continue his education and athletic career with Ancilla College., Arturo, a star for Adams on the soccer pitch plans on continuing that career playing for Farkhod Kurbonov and the Chargers. Arturo has had an impressive career with Adams where he has been a Varsity players since his sophomore year.

Arturo intends to pursue a degree in Business Administration. While visiting Ancilla, Arturo fell in love with the campus and the atmosphere that supported it and Coach Kurbonov made Arturo feel like he was needed and would be a great fit for the team.

Present with Arturo at the signing were members of his family including his mother, brothers, and sister as well as several members of the John Adams Boys Soccer team to show their support. 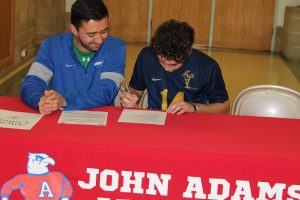 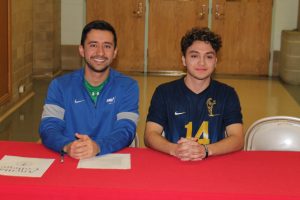 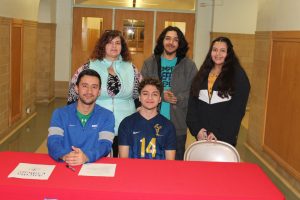 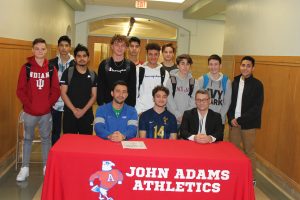 During his years at John Adams, his favorite memory comes from this fall when they Eagles won the IHSAA Sectional Championship.

Outside of school Arturo has a part time job working at Buffalo Wild Wings and enjoys spending quality time with his family.

Arturo wants to send a special thanks to his family and friends who have always been there for him. A special thanks to Mr. McQueen who always let him play on his team since freshman year as well. And of course Arturo wants to thank his mother who is his #1 fan and has always pushed him to do his best and will never give up on his in all that he does as he tries to make her proud.