The Boys Freshman Basketball team is beginning to find its niche as the season goes on and Saturday was the perfect example of the team beginning to play well at the right time of the season.

The Eagles played in the Fairfield Freshman Tournament on Saturday. In the first game of the day, Adams took on host Fairfield. The game was tight at times, but Adams was able to pull away with a 42-40 victory. In the win, Kayden Newhouse scored 19 points for the Eagles.

The victory put Adams in the championship game taking on NorthWood. Adams was able to defeat the Panthers with a final score of 44-39. Brittain Vann scored 13 points for the Eagles and Newhouse had 10 points. 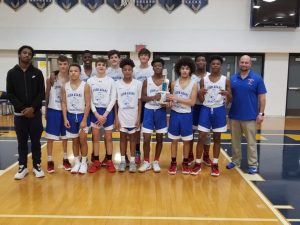