With the end of the season and tournament time quickly approaching, it was time for the Girls Basketball team to honor its senior members on Friday night in their final home game of the season. Before tipping off against SB Washington, the Lady Eagles honored its seniors on Senior Night. Seniors Maria Besario, Anna Fuller, Loryn Higginbotham, McKenna Leichty, and Da’Quejiha Vaughn were honored before the game. 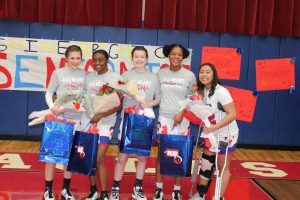 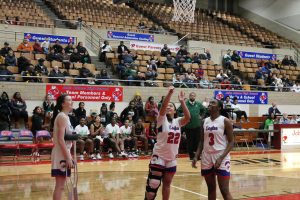 In what became one of the most emotional moments of the night, all five seniors were able to start the game, including Besario, who has been out for most of the season due to an ACL injury. The Washington Lady Panthers showed their face of Sportsmanship and respect for Maria in allowing Adams to win the opening tip, which allowed the ball to be passed to Besario, who got rid of her crutches to score the opening points of the game. Besario was able to close out her home court career in the best of ways.

From there the game turned against the Eagles however. Adams fell behind quickly to the height advantaged Panthers. Just before half, Adams was able to turn the tide, allowing only 7 points in the second quarter. It was not enough however as Adams would go on to lose the game 60-38.

All five Adams seniors were able to score in the game. Higginbotham led the team with 11 points. She was also 3 for 6 from the free throw line. Voughn hit a three pointer for her only 3 points of the game. Leichty and Fuller were both able to be recorded in the scorebook by scoring 2 points each.

Also scoring for Adams were Marissa Shelton and Laila Williams. Both players scored 8 points each. Shelton was 3 for 4 on free throws and Williams was 4 for 6. Valiyah Grundy also scored for Adams, ending the night with 2 points.

The home schedule comes to an end for the Lady Eagles who will play next on Wednesday at Elkhart Memorial HS.

The Junior Varsity team was able to defeat the Lady Panthers, winning with a score of 31-17.