After a huge win on Thursday night in the final dual meet of the season, the Girls Swimming and Diving team was ready to take on the competition at the Northern Indiana Conference Championship Meet on Saturday. The young and talented Eagles were ready to shine in the new state of the art Elkhart Health and Aquatic Center. And shine the Eagles did, finishing in third place overall with a meet score of 322 points.

The meet helps in determining the final NIC standings as well as All Conference Honors. 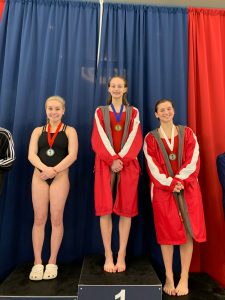 Adams did claim one NIC Championship and that came from Lindsay Gizzi in Diving. Starting the morning off strong, Gizzi sat in second place after the preliminary dives, Later in the afternoon, Gizzi dove her way to the NIC crown, taking the win with 520.25 points. Not only was the score good enough for the win, it also set a new NIC Record in the event!

She was not the only medalist in the event. Katie Hensell had an impressive day which took her to the 3rd place finish in the event with a performance of 439.80 in her 11 dives. Avery Curtis also scored for Adams, finishing in 11th place with a score of 281.80.

While Gizzi and Hensell were the only medalists for the day, that was not the end of the team successes. The Lady Eagles placed at least one swimmer in all of the remaining events in the pool.

Opening up the meet, Eamin Lynch, Sofia Frazee, Lyza Kricheff, and Lyndsay Collins swam 1:57.72 in the 200 Medley Relay which was good for 5th place. Finishing 7th for Adams in 2:05.43 was Elisa Nerenberg, Elizabeth Tarner, Melany Morales Garibay and Addison Skube.

When acton in the pool resumed, so did the hot Adams performances. Kricheff had the best finish of the day for Adams in the swim events, finishing in 4th place in the 100 Butterfly. Morales Garibay swam a time of 1:09.71 which earned her 13th place. Ivie Skube finished in 16th place in 1:12.88.

The three Adams swimmers were close in the 100 Freestyle. Yvette Burton finished in 12th place after swimming 59.76. Collins finished 14th in 1:01.49 and Cecilia Frazee took 15th place in 1:01.74 in the extremely close event.

Nerenberg was the lone finisher for Adams in the 500 Freestyle. Her time of 5:58.92 was good for 8th place.

Ending the day was the 400 Freestyle Relay. Kricheff, Lynch, Morales Garibay, and Burton swam a team time of 4:03.83 which earned the Eagles a 6th place finish. Finishing in 8th place in the event was C Frazee, Nerenberg, A Skube, and A Tarner who swam 4:!5.15.

Selected by the NIC coaches at the end of the meet, Adams Coach Josh Skube was selected the 2020 Girls Swimming and Diving Coach of the Year. Coach Skube has helped the young team that is full of talent to a 7-3 dual meet record coupled with its 3rd place finish on Saturday.

For the final NIC standings for the season, the third place finish earns the Lady Eagles 8 points that are added to the number of dual meet wins which for Adams was 7. Adams finishes with 15 points which is good for a 3rd place final standing in the NIC.