It was Championship Saturday for the Eagles Wrestling team on Saturday as Adams competed in the 2020 Northern Indiana Conference Invitational. The invite is an important one as it determines the final standings for wrestling in the NIC and All Conference recognitions. The day long event showcased the best in the conference.

As a team, Adams finished in 10th place overall with a team score of 50 points.

Individually, Adams was able to have success throughout the day. 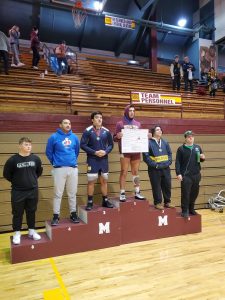 finished with a record of 4-1 for the day. In the opening round, Hill won over Jimtown by fall, pinning his opponent halfway through the second period. Moving onto the Quarterfinal match, Hill lost to his SB Riley opponent by Decision with a match score of 8-7. Hill was not going to let that match get to him and ruin his day. Now challenged with running through the consolation bracket, Hill was ready to rise to the challenge. He used his motion to pin his Glenn opponent just 22 seconds into his next match, winning by Fall. In his next match against SB Washington, Hill again pinned his opponent to take the win, sending him into the Consolation Semifinals. In the semis, Hill outwitted his Bremen opponent, winning by Decision 1-0. The win put Hill in the Third Place match but both Hill and his opponent from SB Riley had already wrestled the maximum allowed matches for the day and the two shared the podium and Honorable Mention All Conference honors.

Adams had another podium finisher in Chykeem Crawford at 182 pounds. Crawford was able to receive a bye in the opening 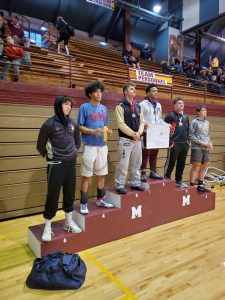 round, automatically sending him to the Quarterfinals. In that match, Crawford came out strong. He was able to win by Decision 11-8 over his SB Clay opponent. The victory took him to the Semifinals where in the final moments of the opening period, despite fighting strong, Crawford fell to the eventual meet MVP from Mishawaka. The loss put Crawford in the 3rd place match. That match was a tough one for Crawford as he and his opponent from Glenn took the entire 6 minutes from all three periods to determine the outcome. Crawford lost the match by major Decision with a score of 14-4 which put him 4th place overall.

Six other wrestlers competed for Adams in the meet.

Wrestling at 132 pounds, Jacob Harsh finished 2-2 as well. In the first round, Harsh won by forfeit moving him into the quarterfinals here just under a minute into the match lost by Fall. He was able to move to the third round of the consolation bracket after a forfeit. From there, Harsh met up against SB Riley where he and his opponent took all three rounds to determine the winner. Harsh ultimately lost the match after fighting hard by Decision with a score of 11-7.

Ryan Downey finished 2-2 at 138 pounds. Downey won by forfeit in the opening round, In the quarterfinals, Downey, facing Penn, lost by Major Decision with a score of 10-2. Moving into the consolation bracket, Downey won his first match in that round by forfeit. In the third round of the consolation bracket, Downey took on Elkhart Central, and after a tough match where he never gave in, lost by Major Decision 11-1.

At 145 pounds, Josh Vasquez finished 1-2. His lone win was a forfeit in the opening round. In the quarterfinals, Vasquez lost by a fall just over a minute into the first round by Fall, getting pinned by Riley. In his first round of the consolation bracket, Vasquez and his Bremen opponent had a tough match as the two battled it out, but ultimately Vasquez lost after three rounds by Decision with a match score of 9-5.

Camden Hanks had a 1-2 record at 195 pounds. Hanks won by forfeit in the opening round. In the quarterfinals, taking on Mishawaka, Hanks lost in the first minute of action by Fall. Hanks bounced back to fight hard in his third match of the day against Riley, Hanks would lose however by Decision with a score of 5-11.

Finally, at 285 pounds, Joe Phillips had several tough match ups. In the opening round, Phillips lost after getting out maneuvered and being pinned in the first period. Coming back later in the consolation bracket, Phillips was pinned again in the opening period of the match. Phillips had one more go at it in the second round of the consolation bracket and responded well, but was unable to get the upper hand in the match against Elkhart central. Phillips lost the match be Decision with a score of 2-0.

Adams will compete again on Tuesday at home on Senior Night when they host Mishawaka Marian.