Entering the last week of the regular season, The Wrestling team honored its Seniors in a dual match taking on Mishawaka Marian in Northern Indiana Conference action. Seniors Ryan Downey, Andrew Hernandez, Horace Hill, Moamel Mahmood, Joseph Phillips, and Melvin Torres were all honored before the Eagles took to the mat vs the Knights. 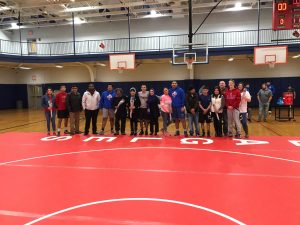 It was a good night for the seniors as the five who wrestled on Tuesday all won their individual matches, helping the team soar to a 51-9 victory over Marian.

Hernandez got the first win of the night, winning by forfeit at 113 pounds. Downey at 145 pounds and his Marian opponent battled hard through three periods of action before Downey was able to get the advantage and got the pin for the victory. It did not take Torres long to strike at 160 pounds, quickly getting his opponent down to get the pin. Hill, wrestling at 220 pounds got the advantage halfway through the second period, winning with the pin. It took Phillips extra time at 285 pounds. Phillips and his opponent battled it out throughout the first 6 minutes of action before finally gaining the upper hand, and winning by Decision after the end of extra time.

The Eagles will host their final dual meet of the season on Thursday when they take on the Penn Kingsmen.