The Boys Basketball season is far from over, but the Adams Eagles celebrated their seniors on Friday night. Seniors Matt Anella and TeVaughn Columbus were both honored and celebrated prior to tip off. Both Seniors got to start the game as the Eagles hosted the Mishawaka Cavemen in Northern Indiana Conference action. Both Seniors got to live it up and both were able to score, each having 2 points for the night. 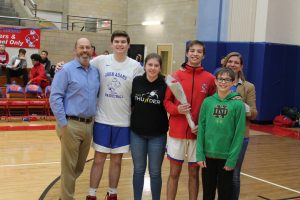 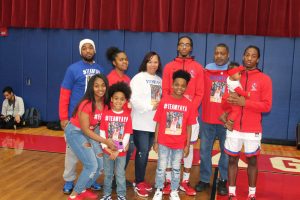 It was an extremely physical and tough fight for both teams, especially in the first half. There were 20+ fouls between the two teams in the first half alone. Adams held a lead throughout the half, but the Cavemen were still pesky and holding on, only trailing by 5 points. When the third quarter started however, Adams began to run away with it, as the team was not willing to give up their perfect record at home or their perfect record in the NIC. The Eagles pulled away, outscoring Mishawaka 37-19 in the second half. Adams would go on to win with a score of 70-47.

Quetez Columbus was the leading scorer in the game. Columbus finished with 19 points.

Adams will play again on Tuesday night when the team hosts the final home game of the season against Bremen.