Friday night marked the end of the regular season for the Boys Basketball team and there was a lot on the line for the Eagles. For the first time since 1979, Adams looked to go undefeated in the Northern Indiana Conference and win the NIC outright. The last hurdle in the way for Adams was a trip on the road to New Prairie.

The first half was typical for how the Eagles have played all season, high tempo and high energy. Adams got out to a 15-7 lead at the end of the first quarter and held that lead going into half time. During the second half, Adams had to adjust the defense as the Cougars got hot from beyond the three point line for a stretch late in the third and into the fourth quarter, and began to chip away at the Adams lead. The Eagles were able to persevere with their athleticism helping them to secure the victory. Adams defeated New Prairie with a score of 66-56.

For the first time since the 1978-1970 season where Adams finished 9-0 in the NIC, the Eagles have won the Northern Indiana Conference title outright. 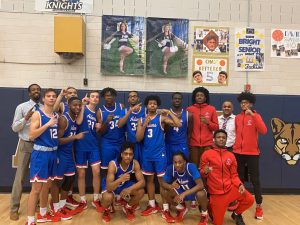 Adams finishes the regular season 20-3 overall and 12-0 in the NIC.

The IHSAA Tournament will kick off next week. Adams will face off against Mishawaka on Wednesday night at 6:00 PM EST at LaPorte HS.