With no sports going on right now, we decided to bring you content highlighting the rich history of John Adams Athletics.

Our first flashback takes us to the first State Championship that John Adams won – the 1966 Boys Swimming and Diving team.

We hope you enjoy this flashback in time and we look forward to bringing you more content soon!

The 1966 Boys Swimming and Diving team finished with one of the most impressive records in the history of the school. The Eagles finished the season without a single loss. Adams finished with a perfect 14-0 record in dual meets and as City, Northern Indiana Conference, Sectional, and State Champions. 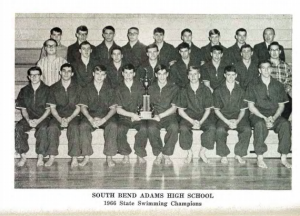 Adams had a total of 11 medalists in the meet, including two individual championships and five runner up finishes. 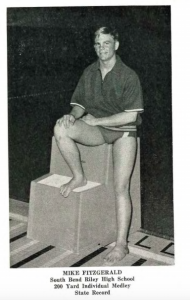 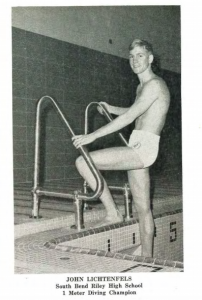 The meet featured 8 new State Records, and Adams set two of those – Mike Fitzgerald in the 200 Individual Medley and John Lichtenfels in Diving.

Fitzgerald took the top of the podium in the 200 Individual Medley, winning in a time of 2:05.0. Taking first in Diving, Lichtenfels set a new State Record of 396.40.

The finishes from Fitzgerald and Lichtenfels earned both All American honors.

In his career, Fitzgerald won three individual State Championships including his 200 Medley title in 1966 and two individual titles during his Senior season in 1968, taking wins in the 200 Freestyle and 400 Freestyle. Fitzgerald was inducted into the Indiana High School Swimming and Diving Hall of Fame in 2007. 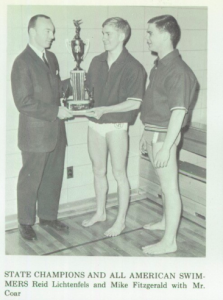 At the Sectional Meet on February 12 at SB Washington HS, John Adams finished as the team champions. The Eagles won with a team score of 110 points. Adams’ Mike Fitzgerald was the leading individual scorer in the meet, scoring 14 points for the Eagles. Adams won 6 individual championships and 1 relay championship on their way to the team title.

At that time in conference history, it was the regular season record that determined the conference championship. Adams also finished as the 1966 Northern Indiana Conference Championship Meet champions, but the meet did not weigh in in the final standings as it does today.

According to the John Adams Album from 1966, Coach Don Coar had set his sights on winning a state championship from the moment he took over the program in the 1961 season. Within those first few seasons, John Adams was well on their way to achieving that goal. The Eagles finished as the State Runner Ups in 1962, 1963, and 1964 before reaching the pinnacle in 1966. Adams won three state championships in a row under Coach Coar in 1966, 1967, 1968.

Coach Coar was inducted into the Indiana High School Swimming and Diving Hall of Fame in 2007.