With no sports going on right now, we decided to bring you content highlighting the rich history of John Adams Athletics.

Our second flashback takes us to the second State Championship that John Adams won – the 1966 Wrestling team.

We hope you enjoy this flashback in time and we look forward to bringing you more content soon!

Wrestling was becoming one of the most popular sports in Indiana in the mid 1960s, and the John Adams Wrestling team was one of those teams that could come to be one of the most competitive teams in the area during that time.

During the 1965-1966 season, the Eagles finished its best season in program history, finishing the season 12-0 and won championships in the South Bend City Championships, Northern Indiana Conference, Sectional, and Regional, all on their way to be crowned the IHSAA State Champions. 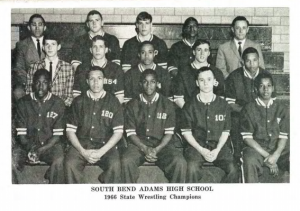 John Mosby capped off the perfect senior season, going undefeated as he wrestled at 127 pounds. Mosby was victorious in 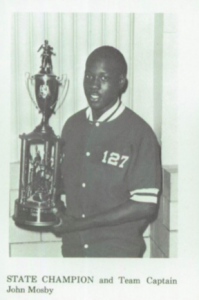 the Championship Round of the State Finals, winning by decision with a score of 7-4. Prior to that Mosby had been crowned the South Bend, Northern Indiana, Sectional, and Regional Champion during the 1965-1966 season.

There were also two State Runner Ups in 1966 as well. William Hill finished his senior season as runner up at 133 pounds. Hill, who had won individual Sectional and Regional Championships in the weeks before lost in the championship round by decision with a score of 7-3.

Horris Russell fought hard in his match in the Championship round before getting pinned in the final period to finish as the State Runner Up. Russell, wrestling at 112 pounds won individual Sectional and Regional championships in the 1966 season. A year later, during the 1967 tournament, Russell went on to win Sectional, Regional and the State Championships while wrestling at 120 pounds.

The Eagles had just capped off a perfect regular season when they hosted the 1966 Sectional. Adams won the SB Adams Sectional with a total of 88 points. There were three individual champions for Adams, one runner up, and four third place finishers.

A week later at the Lafayette Regional, Adams tied for first with Elkhart HS. Both teams scored 38 points. The win was the only Regional Championship for Adams in program history. Russell, Mosby, and Hill were all individual champions in their respective weight classes.

John Adams was also crowned the 1965-1966 Northern Indiana Conference Champions. The title was the third of five team titles that the team has won in program history and the third NIC Championship in a row for the team. Adams finished the conference season with a perfect record of 6-0. The Eagles had regular season conference victories over SB Central, Mishawaka, LaPorte, Elkhart, SB Washington, and SB Riley.

At that time in conference history, it was the regular season record that determined the conference championship. Adams also finished as the 1966 Northern Indiana Conference Championship Meet champions, but the meet did not weigh in in the final standings as it does today.

The day is without a doubt one of the most successful days in the history of John Adams Athletics.

John Adams finished the 1965-1966 season with a perfect record of 12-0. In most of their meets that season, the Eagles dominated their opponents. 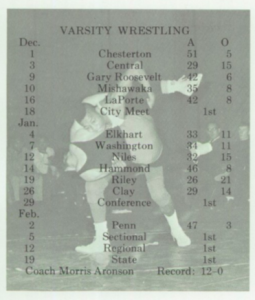 The face of John Adams Wrestling for over two decades was its Head Coach Morris Aronson. Coach Aronson was the coach from 1956-1978 and during that time compiled one of the most impressive records of any coach in wrestling in Indiana.

Coach Aronson finished his career at John Adams with a record of 158-80-3. In his 22 seasons at the head of the program, Coach Aronson had only 6 losing seasons.

Coach Aronson was inducted into the Indiana High School Wrestling Coaches Association Hall of Fame in 1973. 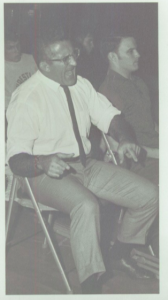 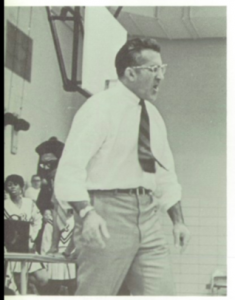 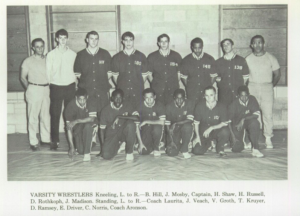